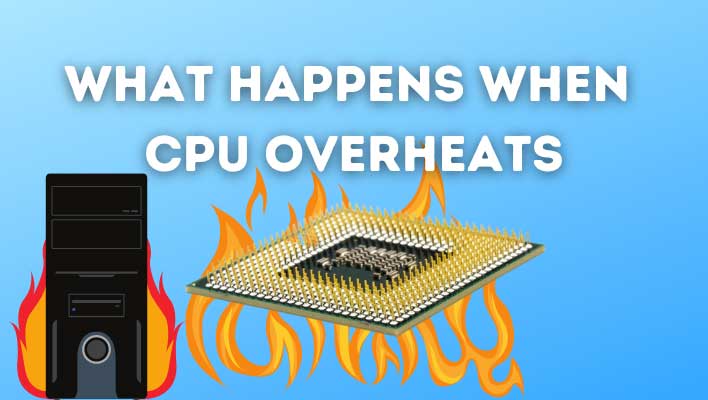 A question that is raised in the mind of every Pc component user is “What Happens When the CPU Overheats?” Whenever we use a machine that is using a lot of electricity, then it is normal for that machine to heat up. The same is the case with computers. When the computers are running heavy software or have been working for hours and hours, then they might end up heating a lot causing the CPU to crash as well.

However, if you are witnessing such things for quite a long time, then we can predict that there might be something wrong with your CPU. In order to tackle this problem, we have written this article where we will inform you about what happens when a computer overheats and what are CPU overheating symptoms.

Contents hide
1 When the CPU Overheats
1.1 Reasons behind When CPU Overheats
2 Check the Temperature of the CPU
3 Symptoms of CPU Overheating
4 Frequently Asked Questions
4.1 What is the normal temperature of the computer components?
4.2 What to do when the CPU overheats?
4.3 Can CPU overheating destroy your PC?
4.4 Will the CPU shut down if it is overheating?
4.5 How do I know if my CPU is damaged?
4.6 How hot can a CPU get before damage?
4.7 Can a damaged CPU Be Fixed?
5 Final Verdict
5.1 Related Posts:

When the CPU Overheats

The major drawback of the CPU being overheated is that it will damage the internal components of your system which may result in substantial cost, irreplaceable damage, and even permanent data loss as well.

Another thing that you might have noticed when your CPU overheats are the appearance of blue screen errors which may result in the crashing of your PC. We have also heard about some situations in which the whole computer catches fire just because of overheating. Moreover, overheating also causes the CPU to lose its optimum performance and would be a lot leggy and annoying to use. Due to overheating, you might even witness freezing of screens and strange graphical pictures on your computer screen, and other kinds of malfunctions as well. You might even witness the screen of death – your desktop screen dies.

The sad part of overheating is that it may also damage the motherboard which may cause you a lot of money. So, in order to treat this problem, we all must know the reasons behind overheating in order to tackle it.

Reasons behind When CPU Overheats

There are many reasons why a CPU may overheat. Some are completely natural but others are signs that there is something wrong with your computer and these are the times when you need to take appropriate action. The reasons are as follows:

Check the Temperature of the CPU

We all know that overheating is a major problem that we need to overcome. But before that, we need to figure out how we can measure the overheating of the CPU. One way of measuring the temperature of the CPU is through its BIOS or UEFI system and then looking at the information that is available there.

Some people even download third-party applications to monitor the temperature of the CPU. You guys can also try those methods. One such software that we can recommend to you guys is the Open Hardware Monitor. This piece of software provides you with not only the temperature of the computer but also tells you about the fan speed of the CPU and even about the load on the technical part of the computer. This information is highly valuable to troubleshoot problems in the future as well.

Now let us jot down some of the symptoms of overheating:

These are some of the symptoms that you might encounter when your CPU is going through the overheating phase. Take these symptoms seriously and try not to ignore them and handle them adequately.

What is the normal temperature of the computer components?

What to do when the CPU overheats?

When your CPU overheats, it is best to provide your CPU with enough breathing space. Always check that it is something blocking the fans of the CPU. Is something not allowing the hot air to flow freely away from the CPU? If yes, then quickly clear that space and allow the fan of the CPU to do its magic.

When the CPU overheats, there are several steps you can take to address the issue and prevent further damage:

Can CPU overheating destroy your PC?

Prolonged overheating can also cause the thermal paste to dry out, which can cause the CPU to overheat even more. It can also cause the internal components of the PC to wear out more quickly, leading to the need for more frequent repairs or replacements.

In summary, CPU overheating can potentially cause damage to your PC if the issue is not addressed in a timely manner. It can cause thermal throttling and permanent damage to the CPU and other components, leading to complete system failure. It’s important to monitor the temperature of your CPU and take steps to address any issues that may be causing the temperature to rise.

Will the CPU shut down if it is overheating?

Yes, most modern CPUs have a thermal protection feature that will automatically shut down the system to prevent damage from overheating. This is a safety measure to protect the CPU and other components from permanent damage.

How do I know if my CPU is damaged?

There are a few signs that may indicate your CPU is damaged. These include:

It’s important to note that these symptoms can also be caused by other hardware or software issues, so it’s best to consult with a professional or run diagnostic tests to determine the cause of the problem.

How hot can a CPU get before damage?

The maximum temperature at which a CPU can operate safely varies depending on the specific model and manufacturer. Generally, most CPUs are designed to operate at temperatures between 0 and 70°C (32 to 158°F) but the ideal operating temperature range is usually between 40 to 70°C (104 to 158°F).

Many modern CPUs are equipped with thermal throttling technology which will reduce the performance of the CPU automatically as it gets hotter. This will help to prevent permanent damage to the CPU by reducing its temperature.

Can a damaged CPU Be Fixed?

It depends on the extent of the damage to the CPU. In some cases, a damaged CPU can be repaired or replaced. However, if the damage is severe, such as a physically damaged die or a broken pin, the CPU will likely be permanently damaged and cannot be repaired.

It’s best to consult with a professional to diagnose and repair a damaged CPU. They will be able to determine the extent of the damage and recommend the best course of action. Keep in mind that replacing a CPU can be costly and in some cases, it may be more cost-effective to replace the entire system rather than trying to repair a damaged CPU.

So, after going through this article, we are sure that you understand the causes of CPU overheating, what happens when your CPU overheats, and how to prevent it. You should always take these warnings seriously or you might end up losing the computer or data. Both of these can prove fatal in their own ways. Therefore, always remain alert when using a computer.

In the end, we hope that this article was quite helpful for you!