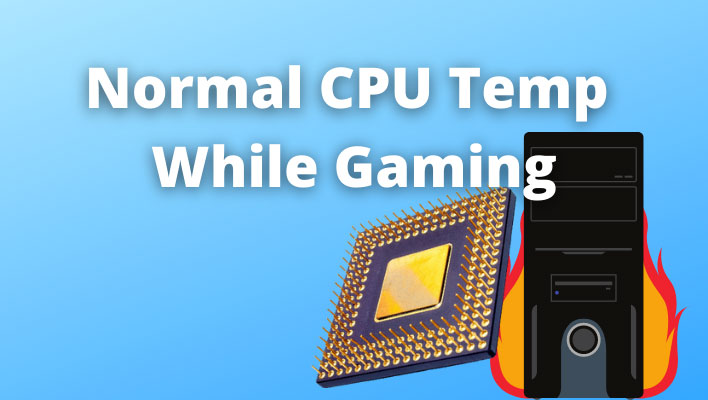 What is a Normal CPU Temp while gaming? is a question that confuses many gamers. Gaming Computers are complex machines and require proper maintenance in order to work efficiently and smoothly. If we don’t take care of these factors. It may result in fatal issues related to hardware and the performance of the computer as a whole or in parts.

Contents hide
1 What are these factors?
2 Benefits of Maintaining Normal CPU Temp while Gaming
3 Flaws of High CPU Temp while Gaming
4 How to keep the Temperature of your CPU Normal?
5 Regularly Changing Thermal Paste
6 Normal CPU temperatures
7 Placing the Computer in a Cool Room/Place
8 Fans and Chassis Coolers
9 Commonly asked questions
9.1 What is a good CPU temp when gaming?
9.2 Is 80 C hot for CPU while gaming?
9.3 Is 70 degrees Celsius hot for a CPU while gaming?
9.4 How do I lower my CPU temp for gaming?
9.5 Why is my CPU getting hot while gaming?
9.6 Related Posts:

What are these factors?

Now, talking about the CPU temperature. Gamers worry about over-heating their chip a lot. Some of the games are graphics card intensive whereas others are CPU intensive. CPU-intensive games usually put more load on the CPU instead of on other main components of the computer.

When playing these games, one should maintain the temperature by tweaking the settings if your CPU does not meet the recommended requirements of the game. Otherwise, it may result in lower frames and eventually overheating of the processor chip which is the gamer’s worst nightmare.

As we discussed earlier, maintaining the normal temperatures of the CPU is a healthy process. Which helps in terms of gaming and performance.

Let’s discuss some of the benefits of maintaining a normal temperature of the CPU.

Excess in everything is dangerous. The same goes for the CPU temperatures. High temperature in the CPU results in lower performance in terms of gaming, surfing and even interacting with low CPU usage apps.

Now, let’s discuss some of the flaws and drawbacks of having high temperatures in CPU chips.

If these CPU chips are exposed to higher temperatures for a long period of time. It may result in a dead or useless processor. That may no longer be fixed or can be used.

At the end of an intro or a video. The app renders the process which requires high load on CPU and GPU. Having high temperatures during this process may lead to permanent or temporary damage to the CPU chip.

How to keep the Temperature of your CPU Normal?

If there is a problem in computing. There is a solution for that also. You can try different ways in order to maintain the CPU temperature and keep your gaming and computing experience enjoyable and unique.

Thermal Paste is one of the main and important parts of a computer and plays a major role in keeping the temperature of the CPU and GPU normal. Basically, it’s a paste that when exposed to heat cools down the chip beneath it.

Average gamers change their thermal paste once in three months. If we don’t change the thermal paste before five months then it may cause a spike in temperatures while gaming and other heavy usage apps.

Here is a general table of normal CPU temperatures based on various workloads:

Placing the Computer in a Cool Room/Place

The temperature of the room also affects the CPU temperature. In winter you can place your computer anywhere you want. Because that won’t have a huge effect on the CPU. As the temperature in the surrounding is already very low.

But in the summer, you need to choose an appropriate place where there is an Air Conditioner or a Cooler.

Some of the processors, despite normal room temperature, show high temps. To cope with this problem. We need to install high-end CPU coolers or plenty of Chassis fans so that it may reduce the temps.

What is a good CPU temp when gaming?

A good CPU temperature when gaming is typically in the range of 50-60°C (120-140°F), with some high-end CPUs able to sustain temperatures up to 70°C (160°F) without any issues. However, it’s important to note that these temperatures are based on the assumption that the cooling system is functioning properly and adequate airflow is present in the case.

In summary, a good CPU temperature when gaming is typically in the range of 50-60°C (120-140°F), but it can vary depending on the specific CPU model and the cooling system being used. It’s important to monitor the temperature of your CPU during heavy workloads like gaming and adjust your cooling system or other settings as needed to ensure it stays within a safe range.

An operating temperature of 80°C (176°F) for a CPU while gaming is considered high and may indicate that the cooling system is not functioning properly or that adequate airflow is not present in the case. At this temperature, the CPU is at risk of thermal throttling, which can cause the performance to decrease in order to reduce the heat generated.

Is 70 degrees Celsius hot for a CPU while gaming?

An operating temperature of 70°C (158°F) for a CPU while gaming is considered to be in the high range and may indicate that the cooling system is not functioning properly or that adequate airflow is not present in the case. At this temperature, the CPU may start to thermal throttle which can cause a decrease in performance to reduce the heat generated.

How do I lower my CPU temp for gaming?

Here are some steps you can take to lower your CPU temperature for gaming:

It’s important to keep in mind that some CPUs may run hotter than others and that the temperature also depends on the workload, so it’s always a good idea to monitor the temperature of your CPU during gaming and adjust your cooling system or other settings as needed.

Why is my CPU getting hot while gaming?

There are several reasons why your CPU may be getting hot while gaming:

It’s important to monitor the temperature of your CPU during gaming and take steps to address any issues that may be causing the temperature to rise. Some steps you can take include: ensuring proper airflow, upgrading your cooling system, monitoring your temperature, cleaning your computer, and monitoring and closing background apps.