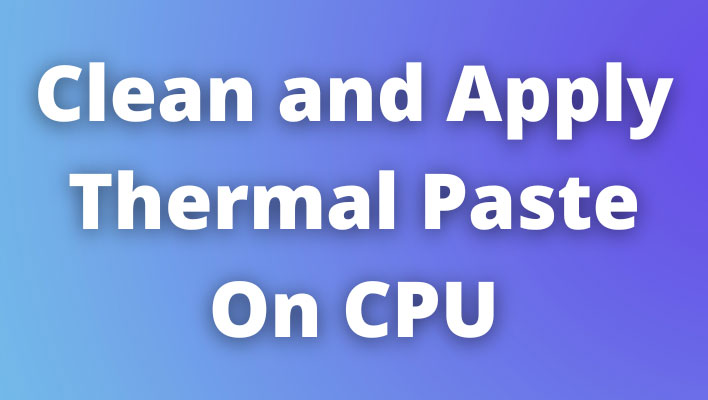 What is thermal paste and why do you need to replace it?

Thermal paste is a substance that is used as a heat conductor between different components. It is a paste that has a very low thermal resistance, which means it has the ability to conduct heat very well. When the thermal paste is used, heat is conducted from a component that is hotter, such as your processor, to the cooler component, usually your heatsink.

It is usually not a good idea to buy the cheapest thermal paste you can find, especially if you are overclocking your CPU. This is because the paste will conduct heat better than the stock paste and if you don’t apply it correctly, you will not see any results when you are overclocking. The thermal paste serves one purpose, and one purpose only – to transfer heat. Thermal paste is not made to be permanent, it will dry out or become worn with time and it will need to be replaced.

Why thermal paste gets old?

But now I have found a solution that might help people understand that computers will always have problems and that the problem isn’t that the computer is aging but that the hardware is not working as well as it used to. The solution is to explain to people why their computer is slowing down, why their internet is not working or why the fans are making too much noise and why the solution to the problem is replacing the thermal paste on the CPU.

How to clean off thermal paste

If you are having difficulty removing all thermal paste from your CPU, begin by wiping it with a microfiber cloth.

Wipe the top of the CPU gently with rubbing alcohol while dipping a cotton swab into it; this will help loosen any hardened thermal paste. To help remove the stubborn paste, you may use a plastic spudger.

If you still have any thermal paste left, you can use a clean portion of the cotton cloth or paper towel to remove it. The alcohol will evaporate almost instantly.

To remove any old thermal paste remaining on the underside of the cooler, repeat the steps above.

How to apply thermal paste

Applying thermal paste to a CPU can help improve the thermal conductivity and cooling performance of your computer. Here are the general steps to apply thermal paste:

It’s worth mentioning that there are different methods to apply thermal paste like “pea method”, “spread method”, “dot method” and each method has its own advantages and disadvantages. It’s best to read the manufacturer’s instructions before applying the thermal paste and also to use a thermal paste that is compatible with your CPU.

Place a small amount of thermal paste in the center of your CPU after it has been installed on your motherboard.

Apply top-down pressure to the cooling unit as you install the CPU cooler. Installing the cooler will distribute the thermal paste evenly because the cooler’s pressure will do that for you. There is no need to spread the paste itself.

Check the edges of the CPU after installing the cooler to see if any thermal paste spilled over, and clean it if necessary with a microfiber cloth or paper towel.

Do you need to clean off the thermal paste before reapplying?

It’s also important to use a thermal paste that is compatible with your CPU and to apply it in the correct amount to ensure optimal thermal conductivity and cooling performance.

How do you clean and apply new thermal paste?

Can you just rub off thermal paste?

Using isopropyl alcohol or a thermal paste cleaner, a lint-free cloth or a toothbrush is a better option. These products are specifically designed to remove the thermal paste, and they can effectively clean the surface of the CPU and heatsink without causing damage.

It’s also important to be gentle when cleaning the thermal paste, as you do not want to scratch or damage the surface of the CPU or the heatsink, which can also affect thermal performance.

How long does thermal paste last on CPU?

The lifespan of thermal paste on a CPU can vary depending on a number of factors such as the quality of the thermal paste, the operating environment, and the usage of the computer.

In general, high-quality thermal paste can last for several years, but it’s recommended to check it every 1-2 years, or if you notice a significant increase in temperature, or if the computer is running louder than usual.

Factors that can shorten the lifespan of thermal paste include high operating temperatures, exposure to dust or other contaminants, and frequent use of the computer. Thermal paste can also degrade over time, losing its ability to effectively transfer heat away from the CPU.

It’s important to monitor the temperature of your CPU and check the thermal paste periodically, and if you notice a decline in thermal performance, it may be time to reapply a new thermal paste.

Can too much thermal paste cause overheating?

When too much thermal paste is used, it can also create air pockets that can trap heat, preventing the thermal paste from coming into contact with the heatsink. This can also lead to overheating and poor thermal performance.

The recommended amount of thermal paste to use is usually a pea-sized or rice-grain-sized dot in the center of the CPU. It’s also important to make sure that the thermal paste is spread evenly across the surface of the CPU to ensure optimal thermal conductivity and cooling performance.

Additionally, if you add too much thermal paste, it can create a mess, which can make it hard to remove the heat sink and also can cause short-circuit if it gets into the wrong places, so it’s important to be careful when applying thermal paste.

Can I reuse dried thermal paste?

It is not recommended to reuse dried thermal paste as it may have lost its effectiveness or become contaminated. It is best to use new thermal paste when reapplying it to ensure optimal thermal conductivity and to avoid potential damage to your computer components.

Is toothpaste OK for thermal paste?

Toothpaste is not recommended as a substitute for thermal paste. Thermal paste is specially designed to fill in the microscopic gaps between a CPU or GPU and a heatsink, allowing for better heat conduction. Toothpaste, while it may have some thermal conductive properties, is not formulated to provide the same level of thermal conductivity and may also contain abrasives that can damage your computer components. It is best to use thermal paste specifically designed for this purpose.

How often should I repaste my CPU?

It’s also important to note that if you are planning to overclock your CPU, you will need to reapply thermal paste more frequently, as the added stress on the CPU will cause the thermal paste to degrade faster.

It’s always a good idea to monitor your CPU temperature using tools like CoreTemp, HWiNFO or Open Hardware Monitor, which will give you an idea of whether the thermal paste needs to be reapplied or not.