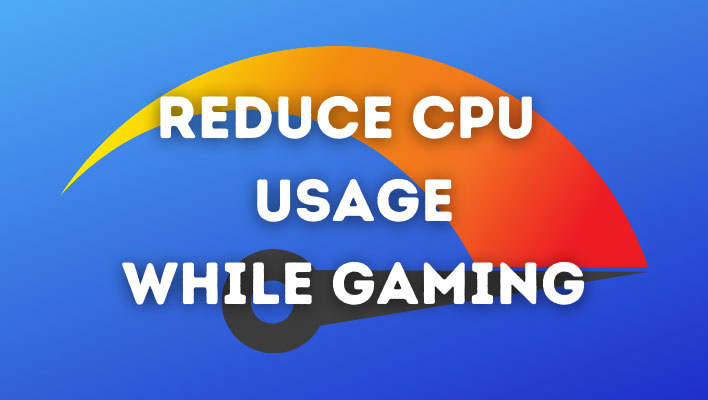 Tired of low Frame Rates due to heavy CPU Usage? Well, we have come up with a number of solutions to reduce your CPU usage while gaming for a smoother experience

Gaming puts a heavy load on the components of your computer. These loads are divided into the different components of your PC. Like CPU, GPU, and Ram. Whereas some games require high Usage of one specific component. You would have heard of CPU and GPU-intensive games.

High CPU usage and lower frame rates are every gamer’s worst nightmare. So brace yourself and try every given solution until you are satisfied with the usage and frame rates during games.

Although, not mentioned below, make sure to check How to check CPU speed After Overclocking, What Happens When CPU Overheats, and also How to Underclock the CPU.

The first step to reduce CPU usage while gaming is before starting any game on the PC. Make sure extra or purposeless processes are disabled in order to disable these processes. You have to navigate to the task manager.

After that, you will see a large number of processes. Some of these processes are not meant to be closed because they are main windows processes. You can disable background apps like Torrent or any other internet browser.

Running Fewer Processes at a time

Try to minimalize the number of processes running at a time. The more processes, the more the Usage. Even the latest processors with a higher number of cores and threads can face resistance in running smoothly.

Some gamers run recording apps in their background to monitor frame rates or record the apps. These apps like Bandicam or Fraps occupy 5 to 10% of the CPU usage of ordinary dual-core and quad-core processors.

Delete or don’t use these apps if you play high requirements games usually. These apps won’t put much effect on Usage if you have high-end processors like the RYZEN series or Intel 7th or 10th generation processors.

Occupying more space in the hard disk also results in slower processes that may ultimately result in higher Usage of the CPU while gaming.

Why is this so? Because when we are enjoying our games, there are some processes that are running in the background, which are called background processes. These are linked to some apps that are installed on your hard disk.

Even if you don’t use these applications or programs, these may put some weight on the Usage of the computer components, mainly the CPU.

To uninstall these applications automatically. You have to navigate to the control panel. After that, click on “Programs and Features,” it will open up a list of applications or programs that can be uninstalled.

Uninstall all unnecessary apps and programs.

Update your drivers to the latest available versions

In order to connect and make the components of the computer fully functional. Some of these drivers contain bugs that are observable and can be fixed without patches. These bugs may cause unnecessary and unusual spikes in the Usage of the CPU and GPU.

The companies release the drivers to fix these bugs. Keeping drivers up to date may fix these small bugs and result in maintained CPU usage for a perfect gaming experience.

Viruses may also cause high CPU usage and disturb your gaming experience. You can scan for these viruses using a Built-in Windows firewall and Windows Defender if you are using Windows 10. You can also download and use third-party software.

What causes these viruses to enter your PC? These viruses enter when your hard disk is plugged into a computer that is infected with a virus. Downloading applications and other programs from some malware websites can also cause the computer to be infected with the virus.

There is a built-in feature in Windows to control the CPU usage of your computer according to the settings that are set.

You have to select the high-performance mode in order to maintain CPU usage while gaming.

If none of the above-mentioned solutions is reducing CPU Usage, then you should reinstall windows to fix the rare bugs and clean your hard drives from viruses.

You have to format your hard drives before installing Windows on your hard disk.

Higher CPU usage may cause a number of problems while surfing or gaming. Some of the effects are visible to us, while some are related to the hardware.

Let’s discuss a few effects of Higher Usage while gaming.

This may cause the frame to drop without any good reason.

Why does my CPU run at 100 when playing games?

There are several reasons why your CPU may be running at 100% when playing games. Some common causes include:

Try to close all other programs and see if that helps, check your task manager if there’s any process that is consuming a lot of your CPU, update your game and drivers and check your computer temperature if it’s overheating.

What should my CPU usage be when gaming?

It’s normal for your CPU usage to be higher when gaming, as the CPU is responsible for running the game and all its associated processes. However, an ideal CPU usage while gaming would be between 70-85%. This allows for enough headroom for the game to run smoothly, while also leaving enough resources for background tasks and for the operating system to function properly. If the usage is consistently above 90% it can cause stuttering and frame drops in your game. It’s also important to keep in mind that different games will have different system requirements and may place different demands on your CPU.

High CPU usage can be beneficial for gaming in some cases, as it indicates that the CPU is fully utilizing its resources to run the game smoothly. However, it’s important to keep in mind that an ideal CPU usage while gaming would be between 70-85%. Usage consistently above 90% can cause stuttering and frame drops in your game. Additionally, it’s also important to keep in mind that having a high CPU usage does not necessarily mean that the game is running at its best. In some cases, it could be an indication of inefficiency in the game’s code or a lack of optimization for the specific hardware. It’s also important to have a balance between the CPU usage and the GPU usage, if one of them is maxed out while the other is not, it can cause bottlenecking and affect your gaming performance.

It’s best to use a monitoring tool such as MSI afterburner or CPU-Z to check your usage and temperature, if you’re experiencing stuttering or frame drops, you can try to lower the settings or upgrade your hardware accordingly.

We have discussed a number of steps on how to reduce CPU usage while gaming. Some of these steps may work for some users while they won’t work for other users. If the above-mentioned steps have not worked for you or you have noticed no major change.

Then the only solution left is to upgrade the Processor.