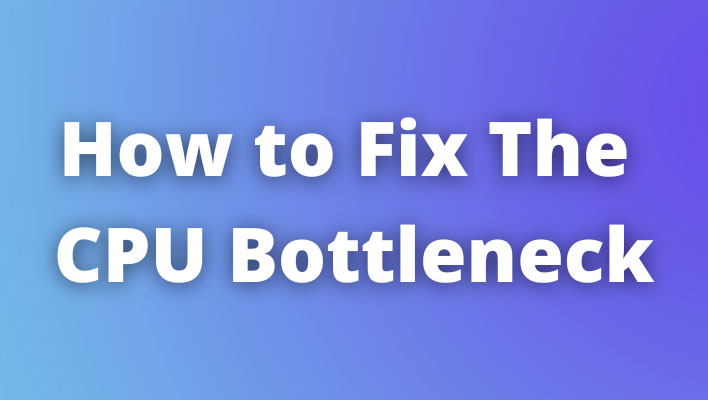 The bottleneck is a nightmare for gamers, but unfortunately, every second, countless gamers face bottlenecks. Bottlenecks occur when a single component of the processor limits the capacity of another application and affects the speed of processing data and information. There are two main types of bottleneck, a CPU bottleneck, and a GPU bottleneck, out of which two CPU bottlenecks are common. So, in this article, we will tell you how to fix the CPU bottleneck.

What is the meaning of the CPU bottleneck, and how to identify it?

The bottleneck derives from two words – bottle and neck. You might have seen the neck of the bottle, has a smaller diameter, which reduces the amount of water flowing through it. The same is the case with the CPU bottleneck.

During the bottleneck, the CPU cannot process the information that is being transferred to it by different parts of the processor like the GPU. CPU bottleneck causes a drop in the processor’s FPS and affects the functioning of the whole processor.

There are two easy ways to identify the CPU bottleneck

Many things cause CPU bottlenecks.

We have tried to cover all the possible things that can cause a CPU bottleneck. Now let’s move towards the most crucial part of the article and discuss, how can you fix the CPU bottlenecks?

How to fix the CPU bottleneck?

You can fix the CPU bottlenecks in the following ways

What happens when your CPU bottlenecks?

A CPU bottleneck occurs when the performance of the CPU is the limiting factor in the overall performance of a system. This means that other components, such as the graphics card or memory, are operating at their full capacity while the CPU is not. The result is that the system is not able to perform as well as it could if the CPU was able to keep up with the other components.

Symptoms of a CPU bottleneck include slower performance in CPU-intensive tasks, such as gaming or video rendering, and a higher-than-normal CPU usage percentage. To alleviate a CPU bottleneck, you may need to upgrade your CPU to a more powerful one.

What are the signs of a CPU bottleneck?

There are several signs that may indicate a CPU bottleneck:

It’s worth noting that these signs could also be caused by other factors, such as a lack of memory or a slow storage device.

Does CPU bottleneck cause low FPS?

A CPU bottleneck can cause a low frame rate (FPS) in games and other graphics-intensive applications. When the CPU is not able to process the data fast enough, it can lead to a backlog of tasks that are waiting to be processed. This can cause the GPU to not receive the data it needs to render the frames quickly enough, resulting in a low frame rate.

Additionally, a CPU bottleneck can cause other issues that can contribute to low FPS, such as low GPU usage, which means that the GPU is not being utilized to its full potential, and long loading times, which can cause the game or application to run poorly once it is loaded.

It’s important to note that there are many factors that can contribute to low FPS, and a CPU bottleneck is just one of them. Other factors include a lack of memory, a slow storage device, or a weak GPU. Identifying and addressing the specific bottleneck is crucial for improving performance.

Will bottleneck hurt my PC?

Additionally, if your system is constantly running at high CPU usage, it may shorten the life of the CPU. This is not a common issue and would only happen in extreme cases where a system is running at high loads for prolonged periods of time.

However, if the bottleneck is caused by another component, such as a slow CPU or GPU, adding more RAM may not completely eliminate the bottleneck. It can still help by providing more memory for the system to use, but the underlying bottleneck will still need to be addressed.

It’s important to note that adding more RAM can be beneficial for the system overall and can help with multitasking and running multiple programs at the same time, but it’s not a one-size-fits-all solution. Identifying the specific bottleneck and addressing it is crucial for improving performance.

Follow us to know more about the technical world.