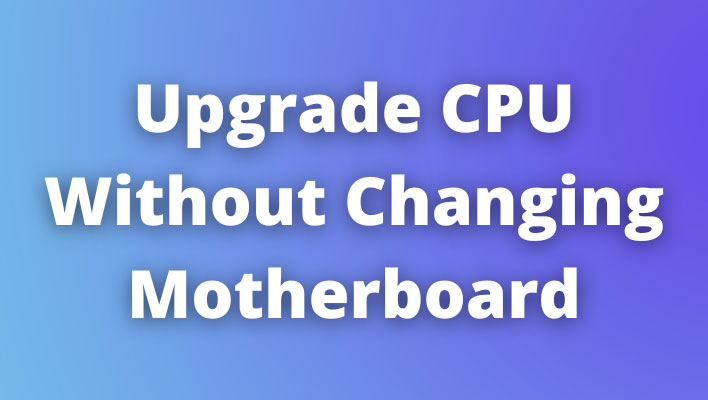 Like everything in the world telecommunication industry is also updating its gadgets every day. Every day manufacturers are introducing a new model CPU in the industry, with enticing features. Every lover of gadgets wants to have their hands on the most updated model of CPU. But it is not simple. Because you cannot upgrade your processor over and over again as it is uneconomical. Have you ever thought, Can I Upgrade the CPU Without Changing The Motherboard?

Our guide will tell you how you can upgrade your CPU without changing the motherboard. And is it worth it? So without skipping any part, make sure to read the article to full length.

How to buy an upgraded CPU compatible with the old motherboard?

CPU is a crucial part of a processor. If you want to add the most updated CPU in your processor without spending the money on the motherboard, then before making a purchase, you need to pay attention to the socket type of your motherboard.

Make sure to buy a CPU compatible with the socket of your motherboard. In the other case, you will lose your money on an incompatible purchase. We have collected the list of motherboard compatibility with different series of CPUs.

Changing the CPU for a better one is the same as changing the GPU of the processor. You can take the CPU off and install the new CPU. But it is easier said than done because older motherboards are no longer compatible with the modern CPU. For instance, it is impossible to install an AM3 socket motherboard into the AMD Ryzen CPU.

Even if the socket of the motherboard and the CPU is the same, there would be no guarantee of compatibility with your CPU and motherboard.

Can I upgrade the CPU without changing the motherboard?

But worry not. If you are using an older version, check which of the modern CPUs your motherboard supports the best, and then choose the most updated one.

You can find the model of your motherboard and the compatible CPUs by checking the manufacturer’s website.

What do you need to know before upgrading the CPU without changing the motherboard?

You need proper research before taking this step. Otherwise, you might waste your money. Along with the socket type, you also need to know about the BIOS (Basic Input and output system) before updating your CPU. Sometimes, while updating the CPU, you need to add new BIOS as well. Because the motherboard doesn’t work with the old BIOS.

And sometimes the motherboard settles with the old one, and you don’t need to add the new BIOS. In rare cases, the old BIOS and the updated CPU can make your motherboard incompatible.

Another common issue people face while updating the CPU is; power incompatibility between the CPU and motherboard. I would like to mention here that a motherboard supplies the required power to the CPU.

The low-end or the older version motherboards have a low energy supply, whereas the power demand of the updated CPU is very high because they have an increased number of cores, threads, and high clocking speed. So, if you are pairing up a low-end motherboard with an updated CPU, there would always be the risk of underpowering the CPU.

If you want to update your CPU without changing the motherboard, then two things can hinder your path.

But if you do proper research, you can avoid these two potential threats. Always go through the manufacturer’s site and make a compatible purchase.

Things are simple with AMD because their motherboard is compatible with the old and new CPUs. You can even add the new version processor to the older motherboards, but you need to update the BIOS. But things are a bit difficult for Intel users.

We have mentioned that there is very little flexibility and upgrading choices in Intel. So, if you want to have modern processors. We will recommend you choose AMD Ryzens gadgets, so you can easily upgrade your CPU without changing motherboards.

Can you upgrade the CPU on any motherboard?

The ability to upgrade a CPU on a motherboard depends on the specific motherboard and CPU compatibility. In general, a CPU can only be upgraded on a motherboard if the new CPU is compatible with the socket and chipset of the motherboard. The socket is the physical interface on the motherboard where the CPU is inserted, and the chipset controls the communication between the CPU and the rest of the system.

A CPU upgrade will also require you to check if the BIOS or UEFI firmware, and the power supply of the motherboard are also compatible with the new CPU. If your current BIOS/UEFI version does not support the new CPU, you would need to update it. Also, the power supply should be able to provide enough power to the new CPU.

In general, it is recommended to check the motherboard’s manual or consult the manufacturer’s website to confirm the compatibility of the new CPU before upgrading.

Also, it’s worth noting that upgrading a CPU can have a significant impact on the overall performance of a computer and it may also require upgrading other components such as memory and cooling solutions.

Do you need to remove the motherboard when upgrading the CPU?

In most cases, you do not need to remove the motherboard when upgrading a CPU. The CPU is typically located in a socket on the motherboard and can be replaced by simply removing the old CPU and inserting the new one. This process involves:

However, some motherboards may have different layouts and may require some additional steps or be more complex to upgrade. It’s always recommended to check the motherboard’s manual or consult the manufacturer’s website for specific instructions before upgrading the CPU.

Can I just swap out a CPU?

In most cases, you can simply swap out a CPU by following the process that I have described in my previous answer. However, there are some considerations to keep in mind:

It’s important to note that even though the process of swapping out a CPU may seem simple, it requires some technical knowledge, and some precautions should be taken to avoid damaging the components.

What do I need to do before upgrading my CPU?

Before upgrading your CPU, there are several important things to consider and do:

What happens if you upgrade your CPU?

If you upgrade your CPU, your computer will likely have improved performance in tasks that are heavily dependent on the CPU, such as running multiple programs at once or running intensive applications like video editing software or games. The specific improvements will depend on the new CPU and how it compares to the previous one. Upgrading the CPU may also require other components to be upgraded, such as the motherboard and memory.

Make sure to check other articles to get the proper CPUs.