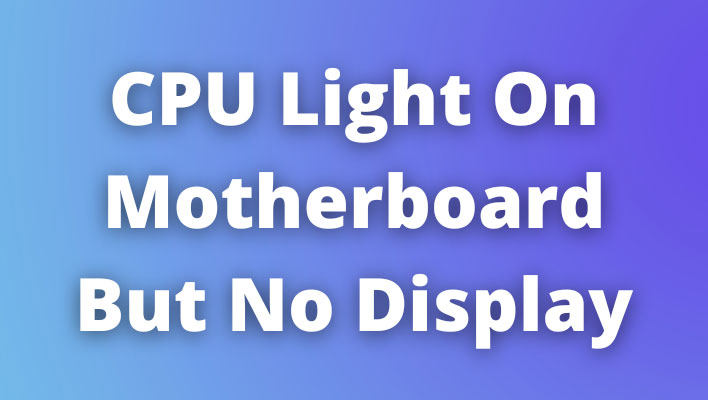 When your motherboard displays a solid red light, it usually means it has not booted properly and needs to be replaced. It could also mean that one of the connected components is faulty or damaged. There may also be other problems, such as a problem booting the system. Hence, continue reading this article and you can often rectify any issue by using the fixes that we suggest. If you are uncomfortable trying the fixes we recommend yourself or if they do not work, please contact technical support. The technicians can assist you in determining whether or not there is a hardware issue as well as handle any warranty issues.

Depending on whether your motherboard actually says ‘CPU’ and has a red light beside it, you really may be dealing with the CPU; if not, then you may be dealing with some other component, so please try the other fixes after you try the ones we will discuss below that specifically concern the CPU.

Several things can be done to try and fix your motherboard if its label says CPU:

An incorrectly connected CPU power cable. This error may occur if the CPU does not have any power to run because it’s improperly connected.

The PSU cannot supply the CPU with enough power to run properly. If all other systems are working properly, then this is extremely rare, but it can still happen. The PSU may need to be replaced if this occurs. In some cases, the PSU might only provide enough power to power up some components on the motherboard but not enough to power up your processor.

You should consider returning it for a new one or checking an article about fixing bent pins if the issue is with the processor’s pins. It may be necessary to return it or check whether the bent pin can be fixed if none of these apply.

Contents hide
1 What Are the Signs That Your Motherboard Is Dying?
2 Conclusion
2.1 Related Posts:

What Are the Signs That Your Motherboard Is Dying?

Follow the troubleshooting steps outlined here to determine if your motherboard has failed. You can try booting with minimal connections by unplugging all hardware.

The board may show signs of damage in rare cases, such as burnt or damaged headers, transistors, and other elements. Static shocks can damage a board without showing any visible signs of damage.

The LED lights on the PC indicate when there is a problem. The motherboards of computers now have four LEDs that indicate problems with different components. It has been shown how to fix the LED lights of two of the top motherboard brands. The method suggested to fix the problem should remove any of these LED lights if it doesn’t work, do the detailed procedure to get rid of them.

Take professional help if you do not think you can perform the task. Inexperienced tactics could make it even worse.